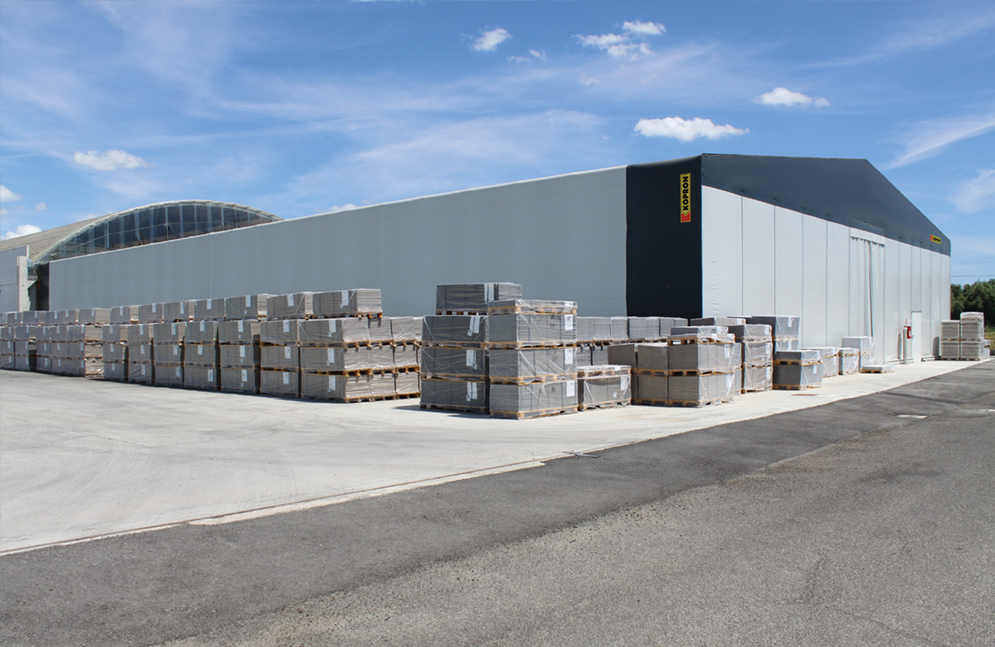 Kopron, a well-known Italian reality both in the logistic and sports field with headquarters near Milan, have given an important contribution to the reconstruction of company Ceramica Sant’Agostino after the earthquake which hit the territory in 2012.

Ceramica Sant’Agostino, needed to install polycarbonate panels on two of the nine warehouses supplied by Kopron, the others have a PVC covering. These warehouses cover a total area of 9000 m², and have been installed immediately after disaster.

Ceramica Sant’Agostino are leaders in Italy and in Europe for the production of porcelain tiles for industrial and domestic use. Rigorous controls on the raw materials bought from the best international suppliers, the maintaining of a human dimension in the professional relationships, the enhancing of our human resources, one of the most important pillars of our company, besides inventive, renewal capacity, avantgarde design, quality and after sale service, research of perfection in every detail, are the unrenounceable heritage of Ceramica Sant'Agostino that is a leader in this field and is often able to direct the competitors' activity.

The devastating earthquake razed many warehouses in concrete, this is the reason why Sant’Agostino relied on Kopron to quickly reconstruct their production pole.

Kopron immediatly intervened with an efficient and reliable solution, in only a few weeks a qualified team of installers managed to assemble two warehouses in insulating sandwich panels covering 1800 m², where a small part of production is carried out, and nine warehouses in PVC for stocking material.

Warehouses in insulating sandwich panels have the same advantages of structures in concrete, but can be assembled in far less time. Between sandwich panels you can install polycarbonate panels to ensure 78% light filtering for energy saving.

All the warehouses were completed with fast packing doors model Fast Pack, the characteristics of which guarantee the least space occupied, fast transit of vehicles and safety due to the double-layer PVC, anti-tear and self-repairing fabric.

Kopron warehouses’ strength is in the carrying structures which are in hot-dipped galvanized steel, guaranteeing robustness and flexibility able to absorb ground

Mr. Marco Benati, chief technician within the Company said: ‘thanks to the job Kopron carried out and to this type of steel structure we feel more safe in case of other earthquakes, since we are in a seismic area. The rapid installation allowed us to get soon back to normality. We are very satisfied with the work done.’

Kopron are very pleased for having given an important contribution to this ‘Made in Italy’ gem.